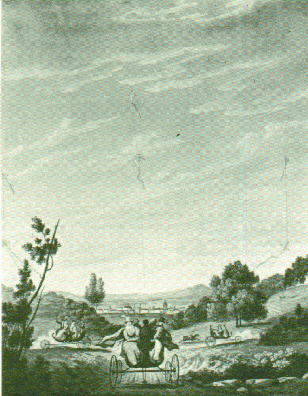 PROBLEM ONE: In 1820, George Pocock connected several large kites to a carriage and pulled it from Southampton to London. Since road taxes were based on the number of horses used to pull a carriage, he was able to avoid any taxes! The 60 mile trip took two hours. Modern kite buggies now go twice as fast but seldom go as far.

How fast was the carriage moving? Hint

PROBLEM TWO: In the year 169 BC, the Chinese General Han Hsin used a kite to measure the distance between his camp and the wall of an enemy city. His soldiers then dug a tunnel the same distance in order to crawl under the wall and attack from inside. The city was conquered by a kite!

How can you measure a minimum distance with a kite? Hint

PROBLEM THREE: Under the direction of Harry Osborne, the Edmonds Community College kite team kept a parafoil in the air from August 21 to August 29, 1982. Their 180 hour, 17 minute flight created a world record for duration flying.

If there we eight members of the team, and each took three hour shifts watching the kite, how many shifts would each team member be responsible for? Hint

PROBLEM FOUR: The largest kites built in Japan are flown in Hoshubana every May. The kites are 36 feet wide and 48 feet tall with bridle lines more than 100 feet long. It takes fifty members of the O-dako (Giant Kite) Association of Hoshubana to launch this giant creation. Each team member is suitably uniformed in a traditional festival jacket that matches the kite. 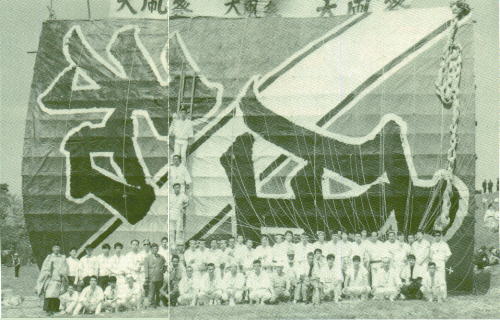 The kite is made from individual pieces of rice paper, each glued together at the edges. If each sheet is 18 inches wide and 24 inches tall, how many sheets are needed to create the sail of this Japanese kite? Hint

PROBLEM FIVE: On February 28, 1989, in Milton Massachusetts, near the Blue Hill Observatory outside of Boston, a large box kite with about 86 square feet of sail rose more than two miles over the earth’s surface. The kite’s flying line was piano wire with a breaking strength of 330 pounds. The flight was conducted by meteorologists Henry Helm Clayton and A.E. Sweetland. Eventually they determined that their kite had risen to an altitude of 12,471 feet.

How can you measure the altitude of a kite using mathematics? Hint

PROBLEM SIX: On May 16, 1987, Troy Vickstrom decided to measure the speed of his maneuverable kite across the beach in Lincoln City, Oregon. The kites speed of 108 miles per hour was measured using a police radar gun. Afterwards, the police issued a citation for exceeding the maximum speed in an area with a posted speed of 20 mph. (The ticket was a joke.)

How can you measure the speed of a moving kite? Hint