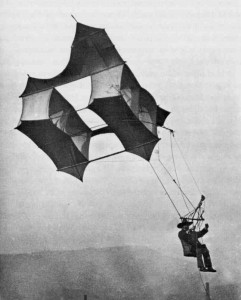 In the late 1800’s a young gentlemen toured the US with the Forepaugh’s Circus and their large Wild West Show. He was well known for his horse riding, shooting and lassoing skills. This gun slinging adventurer from Iowa was Samuel Franklin Cody (not to be confused with Buffalo Bill Cody). He may have gained his footing in life in the wild west showdowns, but Cody would go on to become a pioneer of British aviation.

It is not clear why Cody became fascinated by kite flying. Cody liked to recount a tale that he first became inspired by a Chinese cook; who, apparently, taught him to fly kites, whilst travelling along the old cattle trail. However, it is more likely that Cody’s interest in kites was kindled by his friendship with Auguste Gaudron, a balloonist Cody met while performing at Alexandra Palace. Cody showed an early interest in the creation of kites capable of flying to high altitudes and of carrying a man. Leon also became interested, and the two of them competed to make the largest kites capable of flying at ever-increasing heights. Vivian too became involved after a great deal of experimentation.

Financed by his shows, Cody significantly developed Lawrence Hargrave’s double-cell box kite to increase its lifting power, especially by adding wings on either side. He also developed a sophisticated system of flying multiple kites up a single line, which was capable of ascending to many thousands of feet or of carrying several men in a gondola. He patented his design in 1901 and it became known as the Cody kite.

Balloons were then in use for meteorological and military observation, but could only be operated in light winds. Cody realized that kites, which can only be operated in stronger winds, would allow these activities to be carried out in a wider range of weather conditions. His kites were soon adopted for meteorology, and he was made a Fellow of the Royal Meteorological Society.

In December 1901 he offered his design to the War Office as an observation “War Kite” for use in the Second Boer War, and made several demonstration flights of up to 2,000 ft in various places around London. A large exhibition of the Cody kites took place at Alexandra Palace in 1903. Later he succeeded in crossing the English Channel in a Berthon boat towed by one of his kites. His exploits came to the attention of the Admiralty, who hired him to look into the military possibilities of using kites for observation posts. He demonstrated them later that year, and again in 1908 when he flew off the deck of battleship HMS Revenge on September 2. The Admiralty eventually purchased four of his War Kites.

In 1905, using a radically different design looking more like a tailless biplane, he devised and flew a manned “glider-kite”. The machine was launched on a tether like a kite and the tether was then released to allow gliding flight. The design showed little similarity to his earlier kites but had more the appearance of a tailless biplane. It was notable in being the first aircraft to use ailerons (in fact they were elevons) effectively to control roll.

Cody eventually managed to interest the British Army in his kites. In 1906 he was appointed Chief Instructor of Kiting for the Balloon School in Aldershot and soon after joined the new Army Balloon Factory down the road at Farnborough, along with his purported son Vivian. The Factory would eventually become the Royal Aircraft Establishment and Vivian Cody would go on to a long and successful career as a technical specialist.In 1908 the War Office officially adopted Cody’s kites for the Balloon Companies he had been training. This group would in due course evolve into the Air Battalion of the Royal Engineers, No. 1 Company of which later became No. 1 Squadron, Royal Flying Corps and eventually No. 1 Squadron Royal Air Force.

Finally, in 1907 he created an unmanned “power-kite”. Somewhat similar to his standard kite but with bigger wings and a tailplane with twin fins in place of the rear cell, this was fitted with a 15 hp Buchet engine. It was not allowed to fly free; Cody strung a long aerial wire down the length of the Farnborough Balloon Shed and flew it indoors.

All that remained to him was to bring the manned-free-flying glider together with the power-kite’s engine to create Britain’s first aeroplane. **Wikipedia

Want to try making your own Cody Kite?  http://www.instructables.com/id/how-to-make-a-cody-war-kite/

or this compound Cody on the kite plan database: http://www.kiteplans.org/planos/comcody/comcody.html

Follow along at this workshop build of a Cody